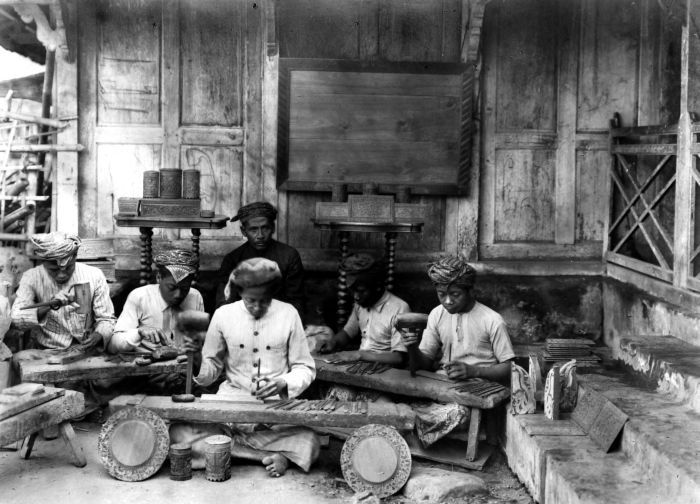 During the Kingdom of Kalinyamat, Jepara architecture progressed, especially in the field of carving. Precisely when Tjie Bin Thang (Toyib) and his adoptive father Tjie Hwio Gwan moved to Java (Jepara), When Tjie Bin Thang (Toyib) became king in a Kingdom of Kalinyamat, where Toyib became king with the title Sultan Hadlirin and Tjie Hwio Gwan became the governor Sungging Badar Duwung. The meaning of the title of Sungging Badar Duwung is (sungging “carving”, bad “stone”, duwung “sharp”). The name sungging was given because Badar Duwung was a chisel expert and carving art.

Tjie Hwio Gwan is the one who makes carved ornaments on the walls of Astana Mantingan Mosque. It is he who teaches the skills of carving to the people in Jepara. In the midst of his busy life as the mangkubumi of the Kingdom of Kalinyamat (Jepara), Patih Sungging Badar Duwung still carves on stones specially imported from China. Because the stones from China are insufficient, the residents of Jepara carve carvings on white and wood stones. Tjie Hwio Gwan teaches carving to Jepara residents, so that the architecture of the house in Jepara is decorated with carved ornaments because Jepara residents are skilled in carving, even now Jepara wood carving furniture products are known throughout the world.

Authentic proof of Jepara carving in the form of artifacts from the era of Queen Kalinyamat at the Mantingan Mosque. Jepara carving has a trace in the reign of Queen Kalinyamat (1521-1546) in 1549. The Queen has a daughter named Retno Kencono who plays a big role in the development of carving. In the kingdom, there was a minister named Sungging Badarduwung, who came from Campa (Cambodia) and he was a good carver. The Queen built the Mantingan Mosque and Makam Jirat (tomb for her husband) and asked Sungging to beautify the building with carvings. Until now, the carvings can be witnessed in the Mosque and Tomb of Sultan Hadlirin. There are 114 reliefs on white stone. At that time, Sungging fulfilled Queen Kalinyamat’s request.

It is said to be a unique story that became the story of the history of the origin of the art of sculpture [2] in Jepara. The story became a myth before bed when I was a kid. My dad often tells it, over and over, and I’m never bored to hear it. Here’s the story. In ancient times there was a sculptor and artist from Majapahit Kingdom, East Java. It was during the reign of King Brawijaya. The caretaker named Prabangkara is also called Joko Sungging. Paintings and carvings Prabangkara has been very well known throughout the country. One day, King Brawijaya wanted to have his wife’s paintings in a naked state without being dressed as a royalty. Because of that, Prabangkara was called to realize the king’s wishes. This is, of course, a difficult thing for Prabangkara, because of knowing the face of the king’s wife, but she never saw the king’s wife without clothing. With his hard work and imagination, Prabangkara finally worked on the painting. When Prabangkara was resting, suddenly there was a fissile laceration and about the painting of the queens. The lick dung is dried up and becomes a form of a mole. The king is certainly very happy with the work of the Prabangkara. A perfect painting, just like the original. The king looked closely at the painting. As soon as she saw the mole, the king was furious. He accused Prabangkara of seeing the queen without clothing. Because mole locations are exactly as real. King Brawijaya was jealous and punished Prabangkara painter by tied him in a kite, then flown it. The kite flies up to the Rear of Mount in Jepara and landed on the Behind the Mount. The back of the mountain is now called Mulyoharjo in Jepara. Then Prabangkara taught the carving knowledge to the people of Jepara at that time and the Jepara carving skills survived and remained until now.

Leave a reply Click here to cancel the reply